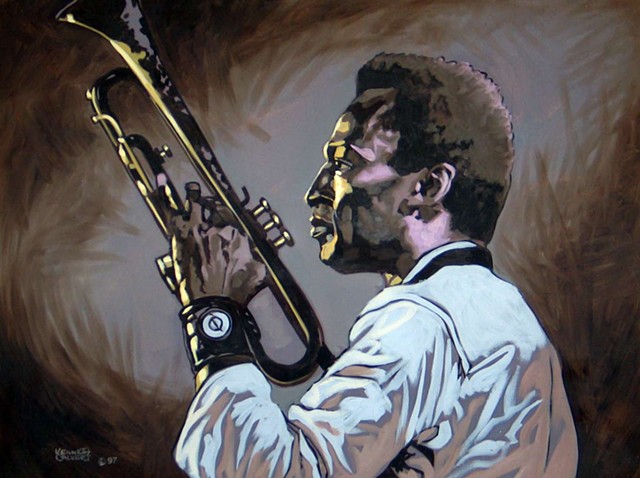 Miles Davis Born: 26 May 1926 Died: 28 September 1991 (age 65) Birthplace: Alton, Illinois In the 1940s, Miles Davis went off to New York City to study music at Julliard. He ended up playing jazz with Charlie Parker and Dizzy Gillespie instead, soon playing trumpet behind some of the biggest bandleaders of the era. As a bandleader himself during the 1950s and '60s, his influence led to "cool" jazz and the emergence of the musician as composer and arranger. He recorded many classic albums, including Relaxin' With Miles Davis, Birth of the Cool, and Kind of Blue; his 1969 Bitches Brew, merging jazz with rock and free-form improvisation, made the top 40 pop charts. Unlike many trumpeters of his era, Davis relied on tone rather than speed, often using a mute with his horn. He is considered one of the most influential musicians of the past century. Click on prints above and visit my entertainment gallery for purchasing details.